When We Were Innocent

Libby Trent has worked hard to make a good life for herself. She has a happy, messy home in Virginia, full of family and laughter. And a job she’s enormously proud of at a charity helping the disadvantaged, that suits her strong sense of what’s right and wrong.

But everything changes the day she’s contacted by a government official asking questions about a man named Hans Brenner, a Nazi who escaped Germany after the Second World War. A war criminal guilty of the most heinous deeds.

And the man they suspect is Libby’s own father.

She has always known that her father was born in Germany, but what they’re saying is simply impossible. Her frail, elderly father is the sweetest man she knows. With his kind eyes, his tender care, his passion for social justice, he is the person who taught her every value she has… He can’t possibly be the evil man they are saying he was.

But the official is insistent. He says he knows Libby’s father is Hans Brenner, but he tells her they need more evidence for the trial to go ahead—even if it is just a photograph, a letter, or something her father might have kept from those days. And Libby is the one who could find it for them.

Libby knows terrible acts should never go unpunished. But she refuses to believe her father could be guilty, and so she decides to search for something that can prove his innocence. She knows she simply has to find it, because if she can’t…

Then everything she thought she knew about her father, about herself, and even about history may be changed forever. 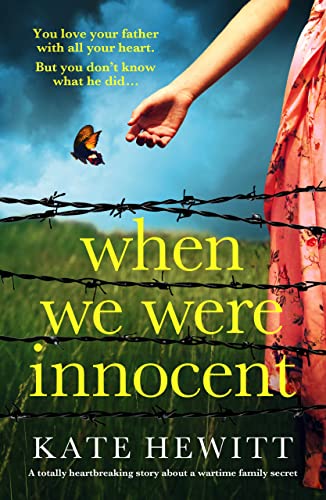 I am so heartened when readers reach out to me to tell me they've enjoyed one of my books. Thank you to each and every one who has sent a message, posted on my FB page, or just picked up my book! To that end, I am hoping to bring together a group of dedicated readers who would be interested in actively promoting my books on social media, in real life, wherever! If this might you, please message or email me (katehewitt@kate-hewitt.com) for more information. The idea is that there would be a small team of readers who would be able to read my books before publication as well as some extra content, early info and involvement on new books, etc, and hopefully share the love in whatever channels are most appropriate for them. Thank you readers!! 🥰

Thanks to everyone who responded. I am going to set up a separate FB group for those who expressed interest--watch for an invite! :)

This would be lovely if it could also include any who only read in paperback. For now at least I support with my reviews of your wonderful work Kate!. <3

I would absolutely love this...I have read all your books and think your amazing x

What an amazing opportunity! Love your books.

The ebook of The Girl in the Picture is available now for only 99c!

We're talking about books that helped us get out out of our reading slumps today! Join us: https://t.co/9wqYyQgdfp #BookTwitter