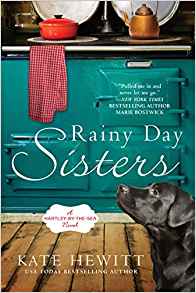 A CONVERSATION WITH KATE HEWITT

Q. What was the inspiration for Rainy Day Sisters, and the Hartley-by-the-Sea series in general?

A. Moving from New York City to a village like Hartley-by-the-Sea was a huge culture shock for me, and it has inspired my writing in all sorts of ways. When I thought about the idea for Rainy Day Sisters, I knew I wanted to write about someone who was plunged into this quirky and endearing world and how it changed her life, just like it changed mine.

Q. I love stories about sisters, and found Lucy and Juliet’s story especially touching, partly because each woman seems very real to me. How did you go about creating their characters?

A. I think all my characters are a compilation of myself as well as of people I know—I’m a little bit Lucy, a little bit Juliet, depending on my mood. I have four daughters of my own as well as a sister who is seven years older than me, and my mother has a half-sister who is seventeen years older than her, so I drew on all of those experiences to create the dynamic between Lucy and Juliet. Ultimately characters become real as you write them, and so Juliet and Lucy started telling me what they were like.

Q. Until recently, you and your family lived in Cumbria—better known to Americans as the Lake District– in a village similar to Hartley-by-the-Sea. What do you see as the most appealing aspects of living in such a small, remote community? What are some of the drawbacks?

A. The remote nature of a village like the real and fictional Hartley-by-the-Sea is both the best and worst thing about it. At times I’ve loved being part of a close-knit community; when we had a house fire, people were giving us spare bedding and blankets within minutes. I love having impromptu conversations with locals every time I step outside, and always recognizing people at the post office shop or the pub. At the same time, having someone whose name you don’t know remark that you were out late at the pub or up awfully early because they saw your light go on can be a bit disconcerting.

Q. Juliet runs a Bed and Breakfast, which is frequented primarily by people hiking in the area. Can you tell more about the British pastime for walking, which is especially popular in the Lake District?

A. I think British people love walking because the country is so small. You can actually cross England from east to west in less than two hundred miles, and I placed Hartley-by-the-Sea on the Coast-to-Coast walk, which is a well-known hiking route across England. I see plenty of walkers about in our village; they’re all starting off as we’re on the western coast, so they’ve got lots of shiny new hiking gear and are full of optimism. I don’t know what they look like two hundred miles later.

Q. Is the weather in Cumbria really as bad as you describe?

Q. Both you and your husband are American-born but have chosen England as your permanent home. What do you most enjoy about living there? Do you still get tripped up by figures of speech or by customs with which you’re unfamiliar? What about the U.S. feels most like culture shock when you return for a visit?

A. After ten years in England my husband and I truly feel that we have a foot in both worlds. We first moved to England just a week after we married, and we had our first two children here. I think experiencing our married and family life here was formative for us, and made us relate more to the English way of doing things, although no one here would ever mistake us for Brits. I’ve come to accept that I speak in an odd mixture of American and British English that probably confuses everyone. When I return to America I’m always shocked by how foreign it feels, at least for a few days. Then I experience the same jarring sensation of other-ness when I return to England.

Q. Juliet’s sheep farmer friend Peter Lanford mentions counting sheep in a local dialect that might be left over from Viking times. How amazing! Can you tell us more?

A. I am fascinated by the Cumbrian dialect, even as I struggle to understand it. Apparently during World War Two two Cumbrian pilots crashed their plane over Iceland and when they met some locals they were able to understand Icelandic, since it was so similar to their Cumbrian dialect. I think because this area is so remote, it has kept traditions and language from a long ago age.

Q. At the Crab Festival, Alex climbs a greasy pole to claim a ham. Is this a typical regional sport? Are all the local customs so quirky?

A. I’ve only seen it done at the Crab Festival, but there are a lot of quirky traditions in this part of the country—fell running, Morris dancing, and pram racing, to name a few. I’m sure I’ll feature them in future books.

Q. Can you tell us a little about your writing day, and how you are able to write so many books while caring for five lively children?

A. Writing started out as my escape from the demands of daily life, and then it turned into a career, which I am so thankful for. Now that four of my children are in school and I have help with the youngest, having a more normal working day is possible. Years ago I was typing one-handed while holding a baby, but I’m grateful now to have several hours of writing time at a stretch. My children can always tell when I’m thinking about a story, usually because they have to snap their fingers in front of my face to get my attention.

Q. The next book in the series, Now and Then Friends, is due out next August. Can you tell us a little about it? And can you hint at some characters from the village who might be getting their own stories in books to come?

A. Now and Then Friends centers on Rachel Campbell, Juliet’s friend from Rainy Day Sisters. Rachel and Claire were childhood friends, but they’ve long since grown apart. I wanted to explore the nature of women’s friendships and how they change over the years. There are both new and old characters in the book—and I hope Abby, who runs the beach café, might get her own book one day, along with her mother.