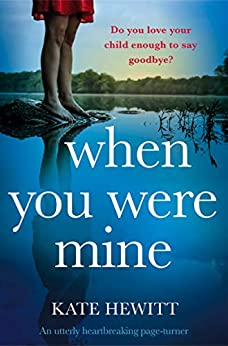 When You Were Mine

Mother-of-two, Ally has always dreamed of fostering—it feels like her chance to give back when she has been so lucky in life. But when seven-year-old Dylan joins her family in their big, spacious, suburban home, Ally isn’t prepared for the responsibility—or for the love—she will feel for him.

Life with Dylan isn’t easy though. He refuses to speak and Ally finds herself only able to guess what his needs might be. And, as her family feels the impact of his arrival, she is forced to question whether she really is a good enough parent to help another woman’s child.

Dylan’s mother, Beth, then begins her fight to reclaim the son who she says is her whole world. With everything at stake for this small, silent, beautiful boy—which mother can truly give Dylan the love, the security, and the home he deserves? Ally knows her life could never be the same again without Dylan in it. But would she really consider letting a child be taken from his own mother forever?

A beautiful, powerful and ultimately uplifting story about the heartbreaking power of motherly love, for fans of Diane Chamberlain, Jodi Picoult and Jojo Moyes.