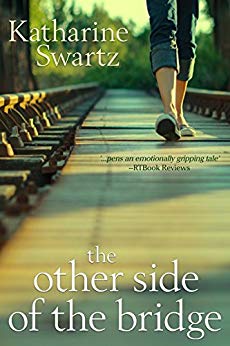 The Other Side of the Bridge

Ava Lancet has lost her job, her marriage, and her baby when she discovers she has inherited her grandmother’s dilapidated farmhouse in a tiny village in central Greece. With the kind of emotional impulsiveness that has frustrated her stony-faced husband for years, she decides to move there and recover from life’s sorrows. It only takes a few minutes in her new home to realize just what a dump it is, and how ridiculously rash her decision was. Yet Ava perseveres, and thanks to her grandmother’s legacy, is welcomed into the village… as well as by handsome widower Andreas Lethikos.

When an elderly woman in the village mistakes Ava for her grandmother, telling her, with tears trickling down her face, that she is so sorry, Ava is both touched and intrigued. What is the woman sorry for, and what secrets did her grandmother keep? With the help of a local schoolteacher who is interviewing the remaining Second World War survivors in central Greece, Ava discovers the surprising threads of her grandmother’s life… and they help to weave her own life back together.

In 1942, in Italian and Nazi-occupied Greece, Ava’s grandmother Sophia
Paranoussis is fighting to keep her family, and especially her impulsive sister
Angelika, safe. When she is approached by a stranger to help with the local
Resistance, she longs to refuse, yet a sense of both duty and honor compel her to agree. Frightened and yet with growing courage, Sophia begins to aid twelve British SOEs who have parachuted into Greece to blow up the Gorgopotamos viaduct–and falls in impossible love with one of them.

Spanning three generations and exploring the lives of two very different and yet surprisingly similar women, The Other Side of The Bridge will remind you how a fragile hope can spring from both tragedy and despair. Written by USA Today bestselling author Kate Hewitt, writing as Katharine Swartz.