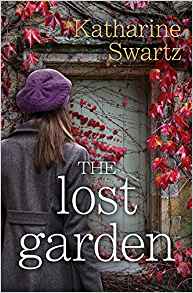 Lonely and stagnating in a soulless job, thirty-seven-year-old Marin Ellis is in need of a new start – but she is not prepared for the one she is given, when, after her estranged father and his second wife die in a car accident, she is made guardian of her fifteen-year-old half-sister Rebecca.

The half-sisters are practically strangers, and their life in Hampshire is stilted and strange. At Rebecca’s pleading they move to the picturesque village of Goswell on the Cumbrian coast, settling into the charming  Bower House on the edge of church property. When a door to a walled garden captures Rebecca’s interest, Marin becomes determined to open it and discover what is hidden beneath the brambles. She enlists the help of local gardener Joss Fowler, and together they begin to uncover the garden’s surprising secrets.

In 1919, nineteen-year-old Eleanor Sanderson, daughter of Goswell’s vicar, is grieving the loss of her beloved brother Walter, killed just days before the Armistice was signed. As winter passes into spring, her mood remains bleak despite her attempts to alleviate the emptiness she feels. When her father decides to hire someone to help Eleanor restore the once beloved, but now neglected, vicarage gardens, she is enchanted by the possibility of a new garden—and the gardener her father hires, Yorkshireman Jack Taylor. Jack understands the nature of Eleanor’s grief more than anyone else seems to, and as they spend time together, a surprising—and unsuitable—friendship unfolds…

The Lost Garden is a luminous novel about tragic secrets,  the chance for forgiveness, and the healing that can come from a new start.

Katharine Swartz lives in the Lake District with her husband, five children, and a Golden Retriever. The Lost Garden is the second book in Katharine’s series, Tales from Goswell.