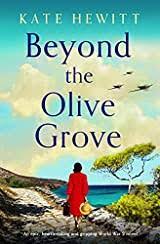 Beyond the Olive Grove

The place seemed utterly still, the only sound was the wind rustling high in the pines above. Standing there, realizing she didn’t even know which house had belonged to her grandmother, Ava wondered just how crazy and desperate she’d been to come all this way with no hope or plan.

When Ava arrives in Greece, it’s with a heart that’s shattered into a thousand pieces. But as she pulls up in a tiny village nestled on a cliff above the glittering Ionian Sea, and steps out in front of a tumbledown house that once belonged to her grandmother Sophia, everything changes.

At first Ava almost wants to laugh at this bizarre inheritance—a home that has been uninhabited since the Second World War—that appears as close to collapse as she herself feels. But with nowhere left to run to, her only choice is to start putting the house together again.

What Ava doesn’t expect is for pieces of her grandmother’s story to emerge, as a local survivor from the war begins to share her secrets. Ava can’t help but be drawn to Sophia’s hidden past… even though the truth could change her own life forever.

Because Sophia’s story is one of devastating choices she had to make during the Nazi invasion of her beloved country. It’s a story of bravery, betrayal and tragedy. But most of all, it is a story about love…

An utterly unforgettable story of two remarkable women who find the strength to persevere against all odds and find hope, courage and light in the darkness. Perfect for fans of The Nightingale, The Lilac Girls and Victoria Hislop’s The Island.